I picked up a PyPortal from Adafruit a couple of years ago. It's been sitting on my desk gathering dust, but now that I have a bit more time on my hands, I've been diving into it.

Circuit Python is based on Python, but is hardware focused, and has some differences - certainly from the more internet services/web development/devOps python I've been using for so many years. And hardware is a different animal than just using Python in a Linux operating system, which is what I'm used to.

There are three elements you need to get Circuit Python going on hardware:

Hopefully up-to-date firmware, which is hardware specific. That page has all of the boards that Circuit Python works on, which is quite a long list! I'm looking forward to eventually trying some of these other boards.

The bootloader which is also board specific, and likely doesn't need to be updated if the firmware is working, but it's good to have this in your pocket - I needed to update mine.

And finally, the Circuit Python Libraries. This is a huge package, that won't fit on most hardware. Here's some information about the libraries that might be useful.

So the first steps are as follows:

My goal is to eventually create my own kind of framework for the PyPortal, along the lines of this one, but more flexible and broad.

I started out with three files: - code.py (required) - secrets.py (also required) - elements.py (my own code)

This is just a file that has a dictionary of passwords, api keys, etc. Right now, it only has:

The functions file is (for now) called elements.py. It has: 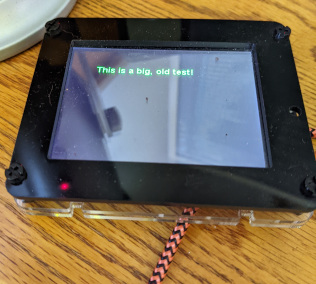 There's a lot more for me to do - bu this is a start. I'm hoping to have this present things like our solar panel output, perhaps notifications from environmental monitors I have (a weather station and Purple air monitor), and perhaps other things.